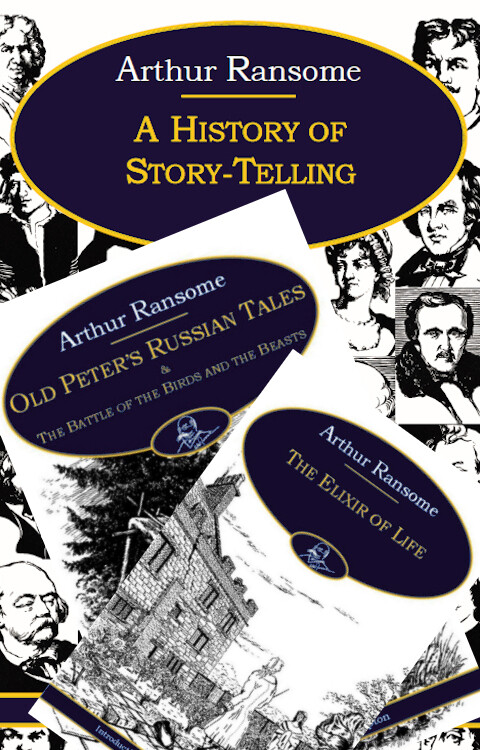 Save £7.50 when ordering A History of Story-Telling, The Elixir of Life and Old Peter's Russian Tales & the Battle of the Birds and the Beasts together via this special offer.

The man who is interested in the way of doing a thing as in the thing when done, is the man who is likely to put a new tool in the hands of his fellow-craftsmen. (A History of Story-Telling, 1909)

In 1901 Arthur Ransome abandoned a chemistry degree to become a publisher's office boy in Bohemian London. He read voraciously, spending every penny he could on books rather than food. By 1909 his 'continual worrying over the technique of narrative' led him to A History of Story-Telling, his exploration of story-telling techniques and the gradual perfecting of narrative form.

Another twenty years would pass before Ransome penned Swallows and Amazons, the first of a dozen novels that "changed British children's literature, affected a whole generation's view of holidays, helped create the national image of the English Lake District, and added (his) name to the select list of classic British children's authors." (Peter Hunt, 1991). In the interim his life took many unexpected twists that made him despair of ever returning to story-telling as the art form he loved. The First World War and Russian Revolution turned him into a correspondent and political journalist. But, before they did so entirely, he was able to complete two significant works. The first, Old Peter's Russian Tales, has remained a folklore classic for over a hundred years. The second, The Elixir of Life, was to be his only novel for adults. Both offer fascinating insights into Ransome's ongoing desire to turn his theoretical knowledge of the art of story-telling into practical results.

A History of Story-Telling, The Elixir of Life and Old Peter's Russian Tales have now all been republished by ART (the latter in a combined volume with a second collection of Ransome's Russian folklore). Each comes with a new introduction: by Philip Pullman, Carnegie Medal-winning author of His Dark Materials, Christina Hardyment, Ransome's Senior Literary Executor and the author of two authoritive works about Ransome's life, and Hugh Lupton, Ransome's great-nephew and one of Britain's leading contemporary story-tellers. Combined in this special, three volume offer, they make for both fascinating and enjoyable reading; an opportunity to explore both story-telling theory and practice with Arthur Ransome, as he gradually learnt how to put a new tool in the hands of his fellow-craftsmen.

Each book is also available separately at full price.

"Anyone who makes a practice of telling stories will recognise at once what Ransome is talking about... and what an agreeable companion he is, with his pipe and his knapsack, and his broad sympathies, and his interest in everything human and his fascination with the art of telling stories." (Philip Pullman)

Save this product for later
Display prices in: GBP

Carrying up the puncheon
Swallows and Amazons

Postage and packing for all UK orders is £3.75.

Overseas postage and packaging is calculated by destination and weight, and shown in your shopping bag and checkout.

UK customers may order online or by mail order.

If you are in Australia, Canada, Japan, New Zealand, the USA or an EU member state, you can place online orders with a combined product weight of 1.86kg or less.

We regret that we do not currently process larger orders from these countries, or any orders from other countries, online. However, you can order by sending us an overseas order enquiry.

We take payment for UK online and all overseas orders via Paypal. You can pay using your credit or debit card by selecting “guest” within the Paypal portal. UK mail orders may pay by cheque. Cheques must be crossed and made payable to “Arthur Ransome Trust”.

We will process and post your order as soon as possible. In most cases delivery should be within 3 – 4 business days for UK customers, 4 – 6 days within the EU, and 6 – 8 days elsewhere overseas. But please note that our shop is not staffed 24 hours per day, or 365 days each year (we need some time off for enjoyable Ransome adventures, after all). It is always possible that your order will coincide with our being half way to Wild Cat Island or at an ART event. Please therefore allow up to 28 days for delivery.

The above information is only a summary of our full Shop Terms of Sale. Please read these before placing your order, as they contain important further information about postage, ordering, payment, dispatch, customs (for overseas orders) and how you may cancel your order. When you order you accept these terms of sale and our other published Terms and Conditions.

Routine orders for ART Publications can be made via Nielsen BookNet Service.

Alternately, please email your order or enquiry to books@arthur-ransome-trust.org.uk.

By continuing to browse the site you are agreeing to our use of cookies.
Font Resize
Contrast
Accessibility by WAH