‘No supplies from Atkinson’s. Occupied by treacherous enemy.’
Pigeon Post

Swallows and Amazons, as Seen from Abroad 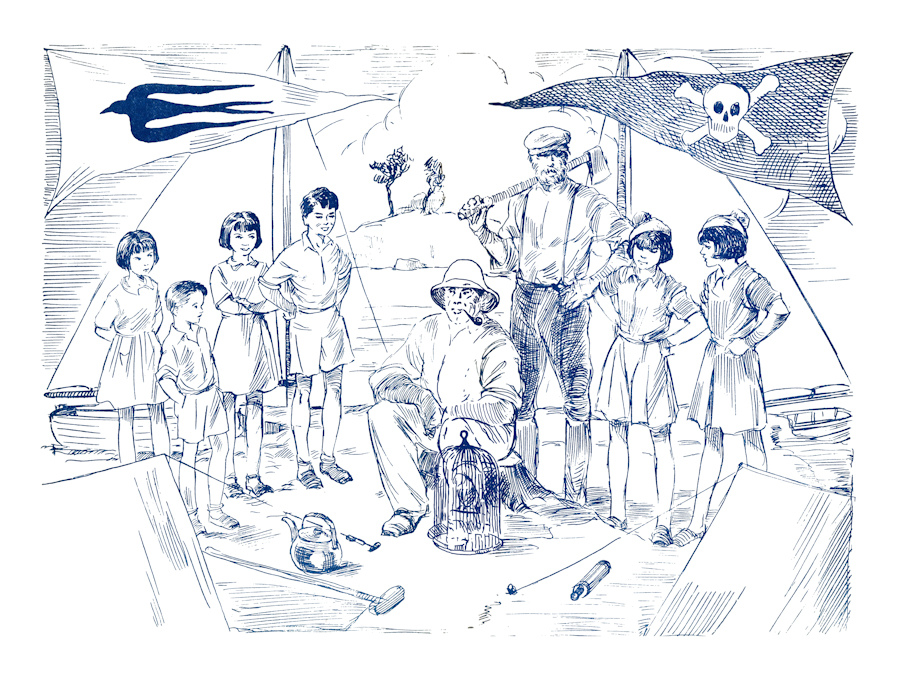 If translating a classic novel is a challenge, illustrating a translation is an art. Join us for our new summer exhibition at Brantwood, from 18 July – 9 August, as we explore the ways in which nearly twenty illustrators have reinterpreted Arthur Ransome’s Lakeland classics.

Arthur Ransome published Swallows and Amazons in 1930. Since then it, and some or all of its sequels, have been translated into over twenty languages, from French and Swedish to Arabic, Thai and Vietnamese. Whilst modern translations usually use Arthur Ransome’s own illustrations, many earlier editions included their own unique drawings. Whether realistic, atmospheric, moody or light-hearted, they provide fresh insights into Ransome’s five Lakeland novels, as seen from abroad.

How did Czech and Japanese artists imagine the Swallows and the Amazons and their friend, Captain Flint? How did Hungarian and American artists interpret a Lake District they had never seen? What choices did Dutch and Danish illustrators make when drawing the same scenes as Ransome himself? What happened when overseas artists drew scenes that Ransome felt were better left to his readers’ imaginations? These subjects form the core of an exhibition rooted in the landscape around Brantwood, yet viewed from as far afield as Helsinki, Tokyo and Prague.

We’re pleased to announce the launch of our new Swallows & Amazons App, an interactive guide to the real and imaginary places in Arthur Ransome’s life and works. It is free to download and use, and available for both apple and android mobile devices. 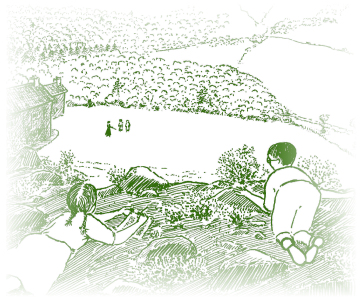 Lookout post on the ridge
The Picts and the Martyrs

A History of Story-Telling

We’re pleased to announce the forthcoming republication of A History of Story-Telling, with an introduction by Philip Pullman.

The man who is interested in the way of doing a thing as in the thing when done, is the man who is likely to put a new tool in the hands of his fellow-craftsmen.

In 1901 Arthur Ransome abandoned a chemistry degree to become a publisher’s office boy in Bohemian London. He read voraciously, spending every penny he could on books rather than food. He longed to tell stories but was continually dissatisfied by his attempts to do so. By 1909 his ‘continual worrying over the technique of narrative’ led him to A History of Story-Telling. Despite its title, A History of Story-Telling is no simple compendium of facts and dates. Instead Ransome gave his pen a livlier, more thought-provoking and enduring aim: to write of story-telling as an activity he loved, exploring, through his heroes’ masterpieces, the development of story-telling technique and the gradual perfecting of narrative form.

It remains relevant over a century later, for both its general observations about story-telling, and for its more specific insights into Ransome’s own fiction, including Old Peter’s Russian Tales, The Elixir of Life and the twelve classic Swallows and Amazons novels.

‘Anyone who actually makes a practce of telling stories will recognise at once that Ransome knows what he is talking about … and what an agreeable companion he is, with his pipe and his knapsack, and his broad sympathies, his interest in everything human and his fascination with the art of telling stories.’ (Philip Pullman).

Are you stuck at home – and worse, bored?

Or are you looking for inspiration for someone who is?

If so, check out our new, free Home Activities Resource Kit. You’ll find:

Remember, a lifetime of exploration and adventure really can begin at home.

The Elixir of Life – Reborn

We’re pleased to announce republication of The Elixir of Life.

Thriller, horror and historical romance, The Elixir is Arthur Ransome’s only novel for adults. As Christina Hardyment’s introduction explains, it is utterly unlike Swallows and Amazons and its sequels. Even so, readers familiar with the latter will find hints in The Elixir of the celebrated novelist Ransome would become, whilst all may enjoy this stirring tale of life, death and love in its own right.

Why not try it yourself, as winter draws in?

We released our new edition of The Autobiography of Arthur Ransome today. It’s the second publication in our Buried Treasure project. Our new edition contains:

It is available now from our shop.

By continuing to browse the site you are agreeing to our use of cookies.
Accessibility by WAH